Edifier recently reached out to us to see if we were interested in taking a look at the TWS NB2 true wireless earbuds. As these were the first bluetooth earphones from Edifier with Active Noise Cancellation (ANC) we had tested, we were keen to put them through their paces. 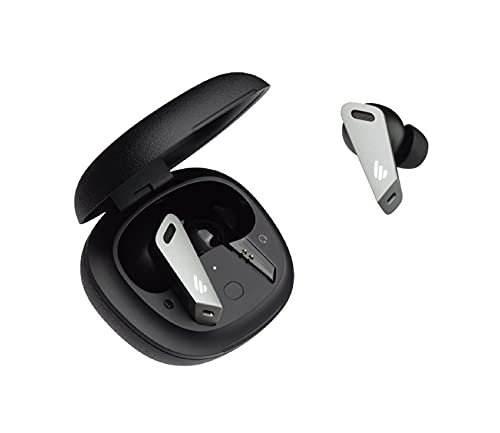 Here is our honest review of the Edifier TWS NB2, which will be updated with the best prices available to buy right now in the UK.

As with other Edifier wireless earbuds we have tested, the TWS NB2 are nicely packaged in a sleek box containing the earbuds, case and a cool cloth carrying bag, three different size ear tips, a USB-A to USB-C cable to charge the case, and user manual.

The case is plastic but has a minimal but premium feel to it, with a soft, smooth, faux-leather finish. The design of the earbuds is certainly edgy and they are striking as soon as you open the case. They give the feel of being far costlier than the price tag suggests.

I’ve personally never been a huge fan of earbuds that have a ‘tail’ that hangs down below the bud, so the look will be subjective, but they feel very light yet secure when in the ear.

There is no charge indicator on the case and no fast or wireless charging but earbud and case battery life has improved so much in the last couple of years this shouldn’t be a major deal breaker for most. The USB-C charging connection is welcome but expected nowadays.

We found these to be some of the most comfortable earbuds we have ever tested. They are lightweight, fit well and sit very comfortably within the ear, without feeling the need to push them right into your ear to feel secure and get a balanced sound. We had no issues when using for long periods through the day.

The clarity of sound is as good as we have heard in this price bracket. For lovers of the deep end, the bass response is incredible for earbuds of this size.

We found the rest of the spectrum well balanced with clear highs and mids, allowing extra details in guitar tracks to be picked out that are often lost in earbuds outside the ultra-premium price range.

The sound signature is highly tuned and may not be to everyone’s taste, but we found it was warm, vibrant and versatile when playing various pop, jazz, reggae, classical, rock, indie, acoustic, blues, soul and other genres. The earbuds are possibly best suited to contemporary R&B and related genres, with that crunching bass which can be cranked up further via (a third party) EQ without losing clarity.

This is advertised as 7 hours with active noise cancellation enabled, and we found this fairly accurate playing a range of music at around 70% volume. This can be pushed up to over 9 hours if noise cancellation is disabled, which is very acceptable when compared to rivals.

The active noise cancellation is a very nice feature to have at this price point and has good performance, with an estimated reduction of ambient noise of around 70%.

An ambient mode is a clever option which acts like noise cancellation in reverse by using the microphones to actually amplify ambient background noise.

This can be handy when out and about and needing to be aware of your surroundings. With the Edifier Connect App you can even control the amount of noise you want to allow through, which is a clever feature, although we did find music quality sounds better with the ANC option activated.

Call quality is acceptable, although was a little low on the receivers’ end during one call, which could have been an issue with the line, as the general user feedback is positive on this.

This was tested on Android and ran smoothly. It has a lot of customisation options and allows the noise cancellation and ambient sound modes to be tweaked without having to toggle through the on-ear controls. Connection was seamless on test and it picked up the TWS NB2 straight away.

Game mode can also be enabled and disabled via the app. The option to control the amount of ambient sound coming through the earbuds is a handy feature allowing more granular control when needed.

Hidden in the settings menu are a lot of other controls, such as power off and a timed shutdown option which will auto-power off after 10, 20, 30, 60 or 90 minutes.

In here, you can also tweak tap control sensitivity, toggle in-ear detection on/off, disconnect bluetooth, re-pair and factory reset the earbuds, as well as access the user manual and even change the name of the earbuds.

The only obvious missing features from the app would be would be an EQ to shape the sound to suit and perhaps the ability to customise the tap controls on the earbuds themselves.

The tap controls on the earbuds are not the most intuitive but offer the option to toggle between the different noise cancellation and gaming mode options.

No customisation of the tap controls is available and volume control is missing. However, all controls require at least two taps. I personally find this preferable as earbuds that have one tap (e.g. to skip track) can be annoyingly accidentally activated when adjusting the earbuds in the ear. The sensitivity of the tap can even be adjusted within the app if you did find this to be an issue.

The in-ear detection is an essential feature for some and works well with the music starting once placed into the ears, and pausing shortly after removing. This feature can be disabled in the app if required.

The TWS NB2 are some of the best true wireless earbuds with active noise cancellation we have tested at under £100, and can even be picked up cheaper than this now the Pro version have been released.

We recommend Amazon.co.uk as the best retailer for price and service right now, and will update with other deals as they are offered.

Hot on the heels of the TWS NB2, Edifier have also launched the TWS NB2 Pro earbuds, featured below, at a best price of not much more than the non-pro version. 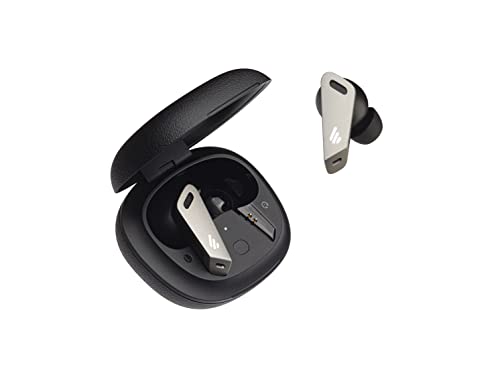 The TWS NB2 Pro feature a few upgrades on the TWS NB2s, with support for the AAC codec, a spatial audio mode and fast charging.

As an Amazon.co.uk Associate, we earn a commission for completed qualifying purchases. Prices may include used as well as new items. Images and pricing taken from the Amazon API and updated in the last 24 hours. Amazon and the Amazon logo are trademarks of Amazon.com, Inc. or its affiliates.